by Dave | Academic How To IELTS Writing Task 1 | 10 Comments

Be sure to avoid the mistakes that most students make on writing by signing up for my exclusive IELTS Ebooks here on Patreon.

More and more of my students are reporting that they have to describe multiple charts in their Task 1 exam, so you need to be prepared for these kinds of questions.

You can see from the examples below that sometimes the charts are the same e.g. two tables or two bar graphs, but other times, it will be a mixture of different types e.g. a pie chart and table, or a line graph and bar chart.

Sometimes there is a close link between the charts so you need to make comparisons. Other times the relationship is not as close so you’re not expected to compare them directly.

Often multiple chart questions are more difficult because it takes longer to understand all the data but you still only have 20 minutes to complete the task!

You still need to describe all the main trends and key details so you must be more selective about what you describe.

In the example below, you have to describe changes to the age of the population over a period of fifty years in Italy and Yemen.

The four pie charts below are closely related so you will need to compare them directly. 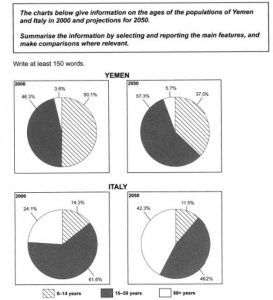 In the example below, you have to compare changes in three fields (average length of schooling, numbers of scientists and technicians, and spending on research and development) in developed and developing countries between 1980 and 1990.

Each bar chart focuses on a separate data field so you will only make some indirect comparisons between the charts, unlike in the pie chart example above. 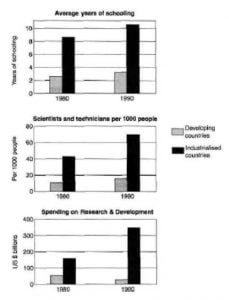 Task 1 questions with more than one kind of chart are quite common.

In the example below, you have to describe the main causes of global land degradation and compare changes in three regions during the 1990s.

Each bar chart focuses on a separate data field so you will only make some indirect comparisons between the charts. 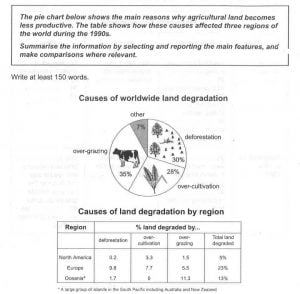 In the example below, you have to describe changes to the number of overseas Japanese tourists between 1985 and 1995, and the percentage of those going to Australia between 1984 and 1994.

Each bar chart focuses on a separate data field so you will only make some indirect comparisons between the charts.

Multiple charts are becoming more and more common so you need to make sure you understand them and have practised them for your writing exam.

As you can see from the examples above, sometimes the charts are the same type and sometimes not.

Sometimes you can make direct comparisons, and at other times it is a more indirect relationship.

Remember, you still have only 20 mins, but there is probably more data to analyse, so you may have to be even more selective about what you describe.

Now it’s your turn! Put your answers in the comments.

Do you think Task 1 questions with multiple charts are difficult?

Sign up for our mailing list to get a FREE Task 1 Writing PDF as well as regular updates about all our IELTS study tips and resources.

The charts show the amount of Japanese tourists who travelled overseas from 1985 to 1995 as well as the market share of Australia during the same period. Overall, despite some minor fluctuations, the numbers of Japanese travellers increased by a massive margin over the years, and the market share of Australia also recorded an upward trend with fluctuations.
Looking in more details, number of Japanese oversea travellers climbed steadily from about 5 million in 1985 to as much as 11 million in 1990. After a dip in 1991, the figure continued to increase and reached a record high of over 15 million.
Likewise, the market share of Australia displayed a rapid growing trend between 1985 and 1988, from as low as 2% to almost 5% by 1985. Even though there was a sharp turn in the following year, Australia managed to break the downward trend and the proportion recovered before slowing down again at 6% by the end of the decade. (161 words)

Careful with articles ‘the number of’ and prepositions ‘to 6%’

What score do you need?

please rate mine, i need about a band 4 score

The pie charts given provide information about how different age groups populated the countries Yemen and Italy and predictions for 2050.

In the year 2000, the most significant age group in Yemen were those belonging in 0 to 14 years old while in Italy, the biggest segment was contributed by those aged 15 to 59 year olds. People who are 15 to 59 years old made up 46.3% in Yemen while in Italy, senior citizens made up 24.1% of the population. Lastly, in the year 2000, Yemen had those aged 60 and above to be the smallest part of the chart while Italy had the youngest age group which were those aged from 0 to 14 years old.

In 2050, it is expected that both Yemen and Italy will have those aged 15 to 59 years old to be the majority, with 57.3% and 46.2% respectively. Yemen and Italy are also both projected to have a decrease in population for those aged 0 to 14. By 2050, it is predicted that both countries will have an increase in the number of senior citizens residing in both countries.

If you only need band 4, then you should be fine…

Why such a low score?

Please ,is this a good overview ? I would really appreciate a feedback.

4.Overall, it can be seen that the number of Japanese tourists travelling abroad showed an upward trend.
While the percentage of Australia’s share of Japanese tourist market ,also increased generally with only a slight fluctuation.

The overview covers all areas so it is good – it is very detailed and could be better grouped together to make it simpler – such as – are there any commonalities between the countries? Is one getting older and the other younger? Try to think more ‘overall’ for your overview.

The second one is find I think but I don’t know the graph for that one.

Overall, it is evident that Europe suffered more from farmland degradation than the other regions and the main causes there were deforestation and over-cultivation.

Great, Prahatish! And the table too?

Exclusive Ebooks, PDFs and more from me!

"The highest quality materials anywhere on the internet! Dave improved my writing and vocabulary so much. Really affordable options you don't want to miss out on!" Hi, I’m Dave! Welcome to my IELTS exclusive resources! Before you commit I want to explain very clearly why there’s no one better to help you learn about IELTS and improve your English at the same time... Read more